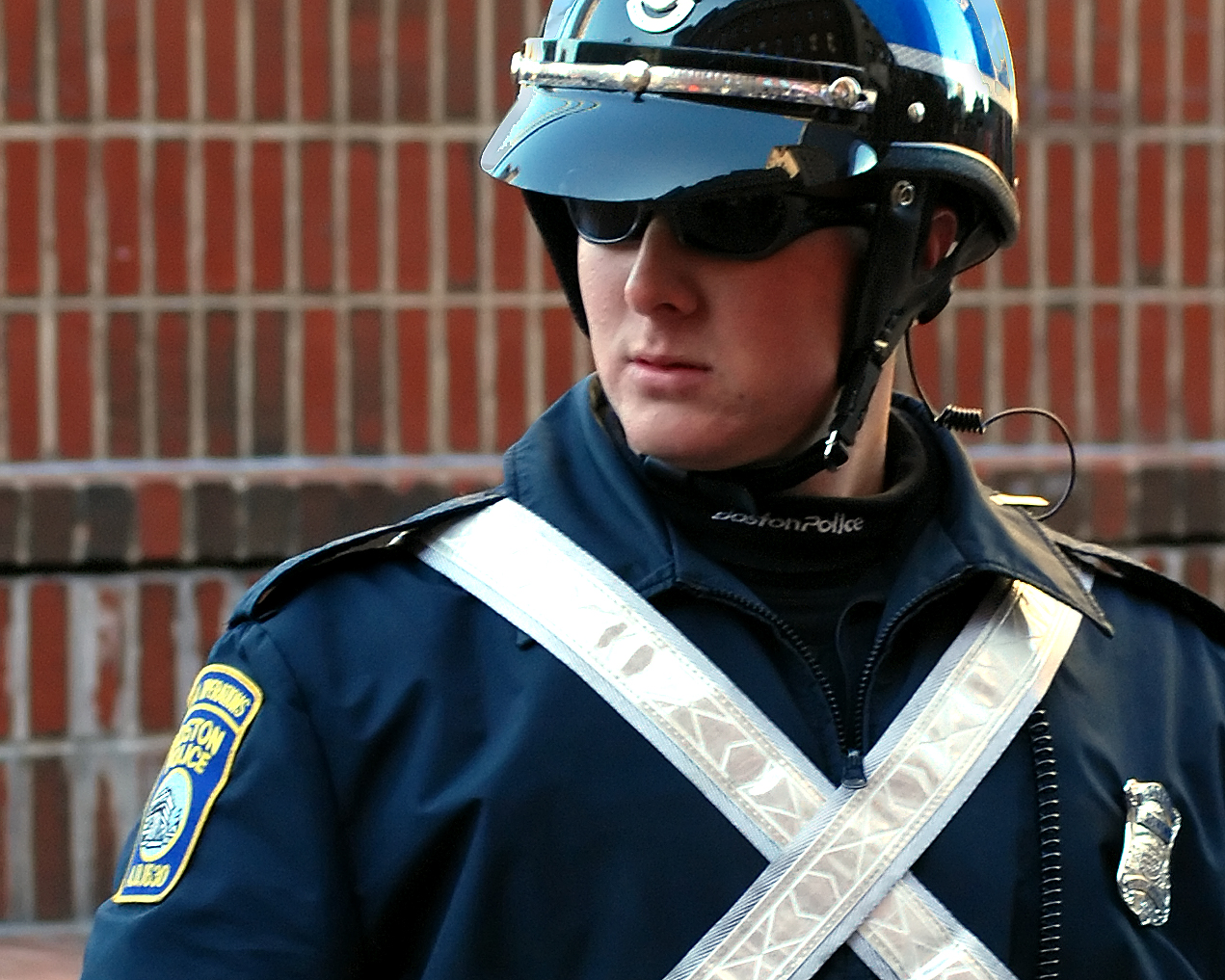 The Boston Police Commissioner says body cameras are a good idea in theory, but that privacy and financial concerns make their swift implementation impractical. That’s good public relations spin if his goal is to sideline this piece of police accountability reform, but it doesn’t help us get closer to a workable body camera plan for Boston. And upon close examination, the facts just don’t support his fears.

On August 5, the Boston City Council held a hearing on an ordinance related to the implementation of a body worn camera program for the Boston police. The ordinance, drafted by the community advocacy group Boston Police Camera Action Team (BPCAT) and the Harvard Black Law Students Association (BLSA), was introduced by the council’s longest serving member, Charles Yancey, who represents Dorchester and Roxbury. The NAACP testified in support of the ordinance, as did many community members. Not a single speaker voiced opposition to the plan, except for the Commissioner and his Superintendent-in-Chief William Gross.

Before the hearing, a modified version of the ordinance containing crucial privacy upgrades suggested by the ACLU and endorsed by the sponsoring groups was shared with the council and the police department. The advocacy organizations and community members present were on the same page about critical details: the ordinance would advance police accountability while also protecting civilian privacy. No one said body cameras were a silver bullet that would heal centuries of racist state-sanctioned terror against Black people. In fact, most advocates acknowledged that body cameras would be only one piece of a much larger effort to address problems with policing.

But pretty much everyone in the packed chambers agreed that a well thought-out, community-driven body camera proposal would be a step in the right direction for our city—particularly for Black and Brown residents most affected by police stops and violence, some of whom were behind the drive for the ordinance in the first place.

Although the modified ordinance offers robust privacy protections for ordinary Bostonians and has broad community support, BPD Commissioner William Evans testified at the hearing that, while he and Mayor Walsh are looking into the possibility of deploying body cameras sometime in the limitless future, he has serious concerns related to financial cost and privacy. The Commissioner therefore advocated a “slow, methodical”approach, saying—confusingly—both that he had closely studied the issue, and that more study was needed before proceeding with a plan. While Evans said he was “disgusted” by the behavior of police officers in high profile cases like the killing of Walter Scott in South Carolina, he dedicated most of his testimony to offering excuses for why body cameras shouldn’t be implemented right away. Besides, Evans seemed to be saying, Boston isn’t like those other places.

Evans’ primary objection to the ordinance seemed to be the cost of implementing a body camera program, followed closely by constitutional and privacy concerns. That the Obama administration has offered DOJ funds for cities to test body cameras didn’t sway the Commissioner. And he didn’t seem to know that the revised ordinance provides robust privacy protections, including a ban on the use of facial recognition technology and directives enabling civilians to decide whether they want their sensitive interactions with police officers to be recorded or not. Finally, he accused the ACLU of hypocrisy for advocating a body camera program while criticizing the city’s deployment of hundreds of surveillance cameras throughout the city and the BPD’s practice of filming First Amendment protected political speech.

Let’s take these issues in turn: cost, privacy, and the tie that binds the two: alleged ACLU hypocrisy. First, to the cost.

“Do I think cameras can help? Again, they can help. We’ve never said no on this,” Evans said at the hearing. “But we have to look at the cost. I know there’s programs out there. President Obama might have the money now, but once this money dries up, then we’re on the hook for it. And it’s at least three million dollars to start . . .  and then it’s about $2.5 million to keep going, year after year. And that’s not even considering, we’re gonna have to hire a whole staff to keep the data, to store it, to upgrade it, with all the FOIAs,” he warned.

The Commissioner didn’t say where he got those numbers from, but let’s take him at his word, and assume that’s how much a body camera program would cost: three million bucks to start, and then $2.5 million per year after that.

If use of force complaints go down, we can safely assume police are treating people better. If police are treating people better, we can safely assume there will be fewer lawsuits against police departments for civil rights violations. As City Councilor Tito Jackson pointed out in the August 5 hearing, the Boston Police Department has paid out nearly $40 million in settlements over the past decade. Between the years 2010 and 2014, BPD paid out at least $8.6 million. If Boston, like San Diego, saw a fifty percent reduction in use of force complaints after adopting body cameras, and those reductions impacted the number of civil rights lawsuits filed against BPD, the city could very well actually save money by implementing body cams.

The police Commissioner’s concerns about accepting federal funds to get a body camera program off the ground without guarantees to keep the program going also ring hollow.

Evans is right to caution that while federal monies for a program like this might pay for the initial costs, they may not be able to see it through year after year, decade after decade. But, on this point, his charge of hypocrisy against the ACLU reads like projection.

The City of Boston and the BPD have received hundreds of millions of dollars in federal funds for the purchase of surveillance systems, information sharing technologies, and even the construction of a so-called “counterterrorism fusion center” at BPD headquarters. As of July 2013, “Boston ha[d] received more than $369 million through eight [DHS] grant programs, including $179 million through Urban Area Security Initiative (UASI) grants,” according to the Department of Homeland Security.

Just this year, the City of Boston sought $17 million in funds through the UASI funding stream. In its grant application, the city asked for:

•   $100,000 for materials for a new ‘See Something, Say Something’ campaign coordinated by the state’s Commonwealth Fusion Center, and more.

Despite its receipt of hundreds of millions of dollars for the secretive expansion of suspicionless surveillance throughout our city, Commissioner Evans has never publicly advocated that the Boston Police or City of Boston reject federal funds for programs like these. When it comes to accepting funds for surveillance cameras and fusion center spying, the Commissioner doesn’t seem worried that Boston’s taxpayers will be on the hook if the federal money stops flowing.

Yet he warns that federal funds for body cameras might someday dry up, leaving local taxpayers holding the bag. That discrepancy also makes it a little hard to take his privacy concerns at face value.

Here’s what the Commissioner had to say about privacy when he testified at City Hall:

“Privacy is a big issue for us. You know, we respect people’s right, when we go behind someone’s door, are we gonna have the ability to keep that camera on? We’re gonna get into all kinds of constitutional issues,” Evans said. “We have strict, people have strict rights to privacy when you go over their threshold. None of those questions have been answered, when the camera’s on, when the camera’s off. Other issues. When you’re talking to a sexual assault victim. Domestic violence. You know, we’re going to be invading people’s privacy. Without a doubt, I’m convinced.”

In fact, the revised ordinance supported by civil liberties and rights groups, which has been distributed to the council and police department, addresses precisely these concerns. The ordinance clearly specifies when officers must film and when they can turn the cameras off.

Moreover, the Commissioner’s expression of support for privacy contradicts his department’s actual practice. After all, the Boston Police Department has its own reality television show. ‘Boston’s Finest’ crews film police as they conduct house raids, and broadcast the inside of people’s homes to televisions across the United States. Finally, it’s confusing to hear Commissioner Evans warn about the privacy risks involved with pursuing a body camera plan, given that the city engages in many forms of warrantless surveillance, with the list of UASI projects above only representing a slice of active BPD surveillance programs.

When Boston wants more surveillance cameras, cost and privacy aren’t barriers. But the comparison of the two technologies is itself inapt.

Surveillance cameras are not like body cameras. Body cameras document interactions between the public and the police, ensuring transparency and accountability. The footage from those cameras is not interlinked into a city- or region-wide system enabling police officers to track someone from camera to camera as they go about their business throughout the day, as Boston’s networked surveillance camera system does. Surveillance cameras watch all of us all the time, no matter whether we are interacting with a police officer or simply going to the grocery store. Body cameras watch us only when we are interacting with the police. And while body cameras have proved an effective police accountability tool in other cities, the studies on surveillance camera efficacy show they do not have much of an impact on serious crime.

Comparing surveillance cameras to body cameras is misleading in another way, too: the former are imposed on the people from above, largely in secret, while affected communities are actively organizing to implement the latter.

A whole host of police surveillance programs are funded and operate in what amounts to total secrecy until the ACLU or journalists find out about them and expose them to the world. Communities across the city are not clamoring for more surveillance cameras; no advocacy group is pushing ordinances in City Hall asking for more funds to be dedicated to police spying at the fusion center.

The BPD has never publicly warned that we should take a “slow, methodical” approach to expanding police spying, or rejected calls for the city to take federal funds for these purposes because of fears of creating an unfunded mandate. But when multiple advocacy groups and hundreds of ordinary citizens lobby City Hall to implement a body camera program to address community concerns about disparate policing in Black and Brown communities, suddenly privacy and financial cost are obstacles requiring endless study and garnering only vague promises about “someday.”

The police Commissioner said the ACLU was being hypocritical, criticizing the secret expansion of surveillance camera systems while calling for body worn cameras on cops. Given the Boston Police Department’s eager acceptance of federal funds for surveillance programs no one asked for, and its slow-walking of the commonsense implementation of body cameras sought by affected communities, you be the judge of where the hypocrisy lies.