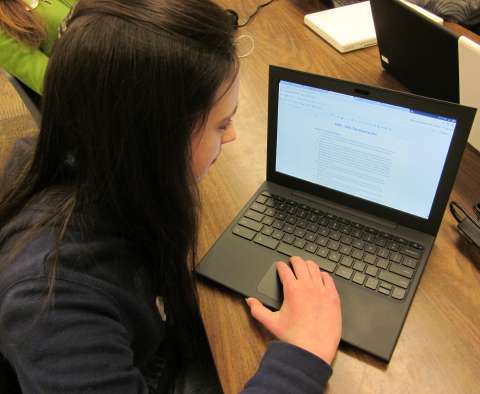 In 1985, the Supreme Court held that before searching a student’s belongings, school officials must have, at minimum, a reasonable suspicion that the student has violated school policy. That rule, established in a case called New Jersey v. T.L.O., applies to backpacks, notebooks, and a student’s physical person. But an ACLU of Massachusetts survey of 35 Massachusetts school districts revealed that this simple standard—prohibiting suspicionless searches of students at school—is almost universally disregarded when it comes to technologies that contain far more information than a notebook or backpack ever could.

Massachusetts schools, like their counterparts nationwide, are fast integrating new technologies into classrooms and administrative management. Today, students throughout the Commonwealth are as likely to take notes on a school-controlled iPad or laptop as in a paper bound notebook. Like the rest of us, school children now leave a data trail behind them as they go about their days. But according to school policies obtained through public records requests, a student’s notes on her computer do not have the same protection from suspicionless search as does her physical notebook.

Two-thirds of the 14 schools that produced policies governing school controlled devices disclosed policies that reserve the right for administrators to search school-controlled devices absent notice or consent. Eight districts state that students have “no expectation of privacy” in the devices, and two districts specifically allow for random or periodic searches.

Likewise, districts almost universally claim that students do not have any privacy right to their online activity on school networks. Most schools that produced policies in response to ACLU requests either state that students do not have any expectation of privacy online or reserve the right to monitor networks without notice or consent—and sometimes the policies both deny a right to privacy and reserve the right to conduct nonconsensual, secret searches. Four districts have policies that go so far as to state that they have the right to share information about student Internet use with the police.

As the Supreme Court has held, writing in defense of freedom of expression in the famous black armband case Tinker v. Des Moines, students do not “shed their constitutional rights…at the schoolhouse gate.”

More recently, the Court held that police officers must obtain a warrant to search someone’s cell phone incident to arrest. Phones, the court wrote, are not like backpacks or purses. First, unlike backpacks, they cannot contain weapons that could possibly threaten public safety. And second, they hold far more information about us than is acceptable to submit to warrantless search.

Before cell phones, a search of a person was limited by physical realities and generally constituted only a narrow intrusion on privacy. But cell phones can store millions of pages of text, thousands of pictures, or hundreds of videos. This has several interrelated privacy consequences. First, a cell phone collects in one place many distinct types of information that reveal much more in combination than any isolated record. Second, the phone’s capacity allows even just one type of information to convey far more than previously possible. Third, data on the phone can date back for years. In addition, an element of pervasiveness characterizes cell phones but not physical records. A decade ago officers might have occasionally stumbled across a highly personal item such as a diary, but today many of the more than 90% of American adults who own cell phones keep on their person a digital record of nearly every aspect of their lives.

What the court wrote of cell phones is also true of iPads and laptops. If the Constitution requires schools to have articulable suspicion that a student has violated school policy before searching her notebook, why should officials give themselves the power to rifle through a student’s iPad or Internet history without any such suspicion of wrongdoing? They shouldn’t.

When I was a student, we didn’t have the Internet in school. When I walked around the library pursuing books, I didn’t have an administrator following me around keeping track of which pages of which books I was reading—despite the fact that the school owned the books. There’s no reason students today should be subjected to any different treatment. “No expectation of privacy” is not the message we should send students in the formative years of their lives, when they are learning what to expect from society and how to relate to authority figures.

Massachusetts schools should apply the analog search policy laid out by the Supreme Court to students’ digital information. At a bare minimum, adults should have a good reason to rifle through a student’s laptop or Internet history. Anything less sends the wrong message to students and risks exacerbating problems like the school-to-prison pipeline, which disproportionately affects Black and brown students, and students with disabilities.