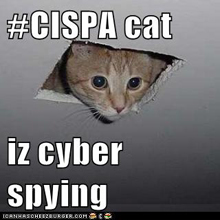 In a thoroughly disturbing so-called ‘oversight’ hearing this morning in the senate, FBI Director James Comey and Director of National Intelligence James Clapper offered a defense of CISPA-like government surveillance operations, without ever mentioning the name of the notorious bill.

Last year my colleague Michelle Richardson described CISPA as “a bill that creates an exception to all privacy laws on the books so that companies holding our private and sensitive information can share it with each other and the government for cybersecurity purposes. This could include the content of chats and emails and people’s online browsing histories. There is no requirement that companies even attempt to remove personally identifiable information before sharing cyberthreat data nor any requirement that the government minimize and protect that data when it is collected. CISPA grants companies liability protection not only for sharing the information but also for using it however they see fit, including aggressive countermeasures, like hacking into an adversary’s computer. It’s an unmitigated and unaccountable mess for Internet users’ private data.”

At the hearing this morning, Directors Clapper and Comey made their cases for CISPA-like law reform, to beef up the security state’s access to the private information of hundreds of millions of Americans, despite recent polls showing that Americans value privacy over vague promises of security. Clapper went first:

There has to be…a partnership between the government and the private sector….The government cannot do all of this by itself. The private sector, particularly if you’re concerned about the piece of this that I am, which are foreign nation states, principally China and Russia…which represent the most sophisticated cyber capabilities against us. And then, you know, the litany of other potential threats, be they non-state actors, activists, criminals, whether foreign or domestic. And we need the civilian sector as kind of our dew-line if you will, our first line of defense. There needs to be some way where we can depend on that sector to report to us to enable the government to help them. I’d ask Director Comey to speak to this as well.

And that’s what I meant…about some of the work we have to do to protect the American people in this area getting all tangled up in controversy around surveillance. Without the cooperation of the private sector, I think of us as, we’re patrolling a street with 50-foot high walls. We can see that the street is safe, but we’re of no use to the folks who need help behind the walls in those neighborhoods. So we have to find a way for them to tell us what’s going on, and us to tell them what’s going on, in order to protect the American people. But it gets caught up in the swirl around “Oh my goodness, the government wants private people to cooperate.” We really do. But we want to do it through clear, lawful guidelines, and rules of the road, to make those communities safer on the street, and in the neighborhoods.”

That last bit reminded me of something I read in Betty Medsger’s new book on the Citizens’ Committee to Investigate the FBI's robbery of an FBI office in Media, PA, and the subsequent disclosure to journalists of documents pertaining to bureau surveillance operations. In "The Burglary", Medsger describes FBI documents that revealed how private corporations, universities, and even medical institutions had for decades simply handed over anything J. Edgar Hoover’s FBI wanted—private information about clients, customers, and students was all ripe for the G-men's picking, no warrant or even subpoena necessary. For years and years in the United States, the vast majority of private and public institutions apparently felt no responsibility to protect sensitive information about people from the FBI’s prying eyes. If the bureau wanted it, it must be for good reason, and they were to have it. (Medsger highlights Stanford University as a notable exception—the only named institution to outright reject Hoover’s demands for records about its students.)

After the multiple waves of intelligence disclosures and reforms in the 1970s, Americans started to become accustomed to the idea that their privately-held information was safe from the government unless they were the subject of a criminal investigation. Among other changes, the Attorney General's guidelines for domestic investigations were established in 1976 to require a criminal predicate before the FBI could monitor someone, providing some protection against inappropriate data collection.

James Comey’s comments today provide yet more evidence that the FBI has returned to the bad old days, where everything is up for grabs and nothing is private from the bureau. The regulatory regimes that were established to protect the public from an FBI gone wild have been mostly discarded, including those prohibitions against spying on innocent people. Since 9/11, the Attorney General guidelines have been watered down to the point where agents need zero criminal predicate before conducting invasive surveillance against us. But despite this free-for-all, the FBI wants yet more power.

When Comey says “we really do” want private corporations to cooperate with the FBI, he means he wants to break down the existing (flimsy) barriers between the troves of data major companies hold about us and the FBI’s own gigantic databases. Astonishingly, during a time when the American public is demanding privacy and an end to the surveillance state, the most powerful members of the national security state are calling for even greater powers.

But the 50-foot high walls Director Comey complains about exist for a good reason. Let’s leave these walls in place, and trust that if major US companies encounter suspicious activity on their networks, they’ll have the good sense to notify the FBI themselves. We don’t need or want open data sharing from the companies to the government, no matter what bogeymen the security state’s officials use to frighten the public. And we don't need more "clear, lawful guidelines" that allow the FBI to do whatever it wants, wherever it wants, however it wants.

Sorry, Mr. Comey. The senate 'oversight' committee for intelligence might go easy on you, but the public begs to differ. We're fed up, and the last thing we're going to do is give you more power.