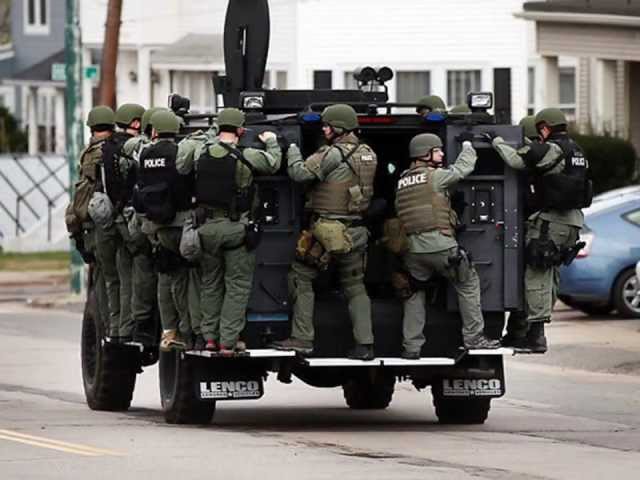 The Framingham, Massachusetts SWAT team has been disbanded. But that doesn’t mean Framingham residents won’t face the terrifying possibility of waking up one morning to bright lights, gun sights, masked men, and screams to GET ON THE FLOOR.

The shift in policy was years coming. Like many places in the US, the suburban city southwest of Boston has a troubled history pertaining to paramilitarized police.

Back in January 2011, the Framingham SWAT team killed 68 year old grandfather of twelve Eurie Stamps. Stamps, an African-American, was not the target of the operation; police were looking for a couple of 20 year old men whom they suspected of selling drugs. When the SWAT team burst through the door in the early morning, they found Mr. Stamps on his stomach, with his hands above his head. An officer shot him dead.

The District Attorney for Middlesex county investigated and found that the shooting had been accidental; Radley Balko writes that, according to the DA’s findings, "the bulky equipment [the officer] was wearing to protect himself may have contributed to his killing of Stamps."

Now, nearly three years later, the Framingham SWAT team is no more. That’s in part because the Chief of police told an inquiry called the ‘Stamps Commission’ that the SWAT team would have to be dissolved if its leader, Deputy Chief of police Craig Davis, were to ever leave the force. Davis has left — he moved on to Ashland, MA, where community members reportedly called for community policing, not paramilitarized cops — and the Framingham chief followed through on his word.

But the demise of Framingham SWAT doesn’t spell the end of militarized policing in the community. Citing a lack of resources to fund an independent SWAT team, the chief of police says he is interested in joining up with one of the regional teams that pepper the Commonwealth. Television viewers worldwide were introduced to some of their logos and acronyms back in April 2013, when they descended on the quiet community of Watertown, Massachusetts to look for the younger Tsarnaev in the wake of the Boston Marathon bombing. Regional SWAT operations provide smaller departments with resources, federal funding, and training opportunities, as well as venues for their eager officers to do hard-charging raids reminiscent of the US military's night-raids in places like Afghanistan.

Massachusetts is one SWAT team down, but thanks in large part to these regional teams, the militarization of the police marches on apace.