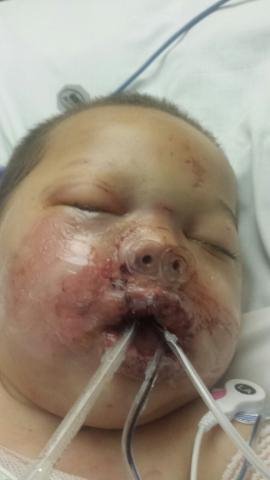 The drug war has claimed another casualty.

19 month old baby Bou Bou Phonesavanh is in a medically induced coma in critical condition, suffering from severe burns and wounds after a Georgia SWAT team threw a flash bang grenade into his crib. The grenade exploded in the baby’s face.

"It landed in his playpen and exploded on his pillow right in his face," his mother told a local television network. The TV station decided not to show “most of the photos” of the child due to the “graphic nature of the child’s injuries.”

"He's in the burn unit. We go up to see him and his whole face is ripped open. He has a big cut on his chest," the baby’s mother told WSBTV. "He's only 19 months old. He didn't do anything.”

The SWAT team conducted the militarized raid after an undercover police informant had purchased drugs at the house. The target of the police raid was not present, but police later found him elsewhere and arrested him on drug charges.

The little boy’s family was in town visiting from Wisconsin when this horrific incident occurred. They have no medical insurance. If you want to help, you can donate to a fund to support Bou Bou’s medical care.

Militarized police raids like this one are disturbingly common in the United States, with some experts estimating that between 70,000-80,000 occur every year. An overwhelming majority of these incursions into private homes are related to drugs.

The war on drugs is killing us. Let's hope it doesn't kill Bou Bou Phonesavanh, who doctors say has a fifty percent chance of survival.