On the weekend of September 5, 2014, the city of Oakland will play host to Alameda County’s 8th annual festival for paramilitary police, called Urban Shield. A private corporation called Cytel Group organizes the events with funds from the Department of Homeland Security. Thus far they've been held in the Bay Area, Boston, and Texas, but the CEO of the for-profit Cytel says he has plans to expand into the Middle East and Africa.

In training operations spread out over almost a week, police SWAT teams, fire rescue, and EMTs take part in war games that officials say are necessary in order to prepare them for catastrophic events like earthquakes and terrorist attacks. But while in the wake of the marathon bombings the medical trainings were arguably useful for Boston’s first responder community, the policing drills and atmosphere smack of exactly the frightening kind of militarization people nationwide have condemned in the wake of the police response to Ferguson.

Last year, for example, the Bay Area Urban Shield exercises for police included SWAT operations directed at a fictional group of protesters called “Occupy Redwood City.” In photographs captured by activists with San Leandro Privacy, we see images of battle-ready militarized-police charging past a banner that looks straight out of Zuccotti Park. 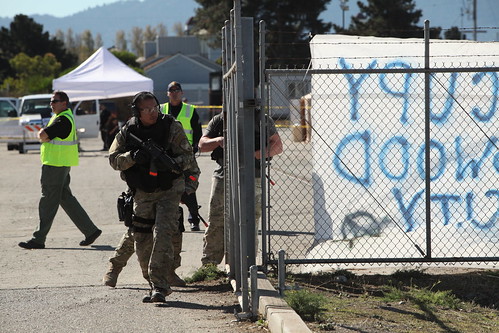 The scenario the war-fighter police are marching into is called “Anarchist Refinery Bomber,” according to another photo in the series. In this exercise, Urban Shield appears to conflate the occupy encampments with terrorist violence. That's dangerous revisionism that potentially puts the lives of non-violent protesters at risk, especially since the only political brutality that occurred during the 2011 protest movement was done by the police. Amplifying the hostility between police and occupy-style protesters by putting on this war-game involving a bombing is troubling in the extreme. 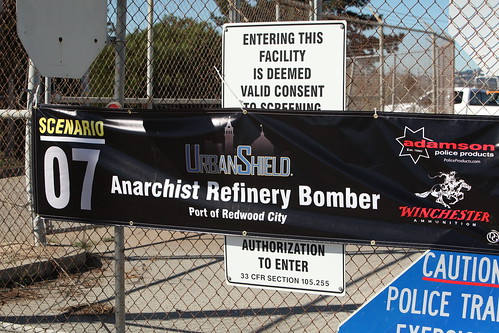 Also troubling is the continued focus—one might even call it a law enforcement obsession—on anarchism as a menacing terrorist threat. Anarchists in the United States haven’t executed any violent attacks on human beings since Italian anarchists in New York tried to blow up JP Morgan’s headquarters on Wall Street in 1920. That was almost one hundred years ago.

But the fear-mongering about anarchists at Urban Shield is made doubly strange in light of some of the merchandise cops can buy at the convention center marketplace for weapons manufacturers, surveillance technology purveyors, and tactical gear producers. One of the companies shopping its wares to law enforcement at Urban Shield advertises a t-shirt with an image of a pistol with the words "GUNS OF ANARCHY" emblazoned above it. That's just one of the many violent and disturbing images this company markets to law enforcement.

That same clothing company also manufactures a t-shirt that reads:

The police are our bodyguards, our hired fists, batons and guns. We pay them to do the dirty work of protecting us, the work we’re too afraid, too unskilled or too civilized to do ourselves. We expect them to keep the bad guys out of our businesses, cars and houses, out of our face. We want them to “take care of the problem.” We just don’t want to see how it’s done.

Below that text, a banner says: “The Tradition Continues.” On the front of the shirt it says “L.A. Crime”. The family of Ezell Ford, a young black man reportedly killed by police as he lay handcuffed and face down on the ground, is likely unimpressed.

Other t-shirts on Elephant Hunter Clothing’s website have the number “187” written on them, the California penal code for murder made famous by gangsta rap. Many contain the image of death, hooded with a scythe, reading things like “Behold a pale horse, and he who sat on it, his name was death. And hell followed with him. Evil Doers Beware.”

A particularly gruesome t-shirt available for law enforcement purchase reads “SMILE NOW, DIE LATER,” above a graphic of a skeleton pointing a gun as if to shoot the reader. Then there’s the shirt that wraps the text “THIS IS MY PEACE SIGN” around an image of a person in a gun-sight with their hands in the air.

Police tell the public that they need to host these militarized trainings in order to protect us. But the t-shirts sold by companies like Elephant Hunter Clothing and Urban Shield’s mock invasion of a Redwood environmental protest tell a different story. They suggest that the military's mission—to kill and control the enemy—has seeped deeper into the culture of law enforcement in America than ever before.