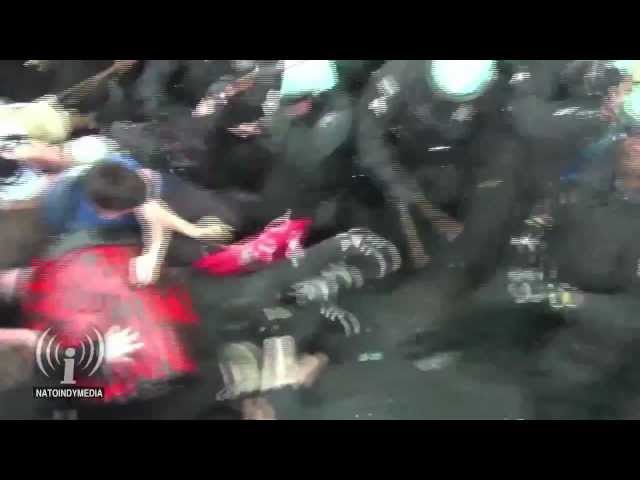 Today jurors in Chicago acquitted Brent Betterly, 25, Jared Chase, 29, and Brian Church, 22 of the terrorism charges levied against them by the State of Illinois. The jury found the NATO 3 guilty of lesser charges, including two counts of mob action. The three have already served two years in prison awaiting trial.

Some quick thoughts about this verdict, and its implications:

1. The verdict is a major hit to the dangerous implication, insinuated at all levels of law enforcement for decades in the United States, that dissent and terrorism are interchangeable. The conflation of dissent with terror has a long and ugly history in the United States, and so it's refreshing and encouraging to see a jury reject it outright.

2. The three young defendants have a pretty good case to make in a civil suit that the terror charges (which were so tenuous and thin that even the notoriously terror-eager FBI declined to get involved) were seized upon to provide political cover for the City of Chicago’s enormous effort to spy on and track the activities of law abiding anti-NATO activists, who descended on the city in the spring of 2012. Previous juries have agreed with claimants who argued that when the government smears activists as terrorists, they are doing it in in order to justify expansive political spying, putting everyone’s First Amendment rights in the crosshairs. (See the case of Judi Bari v. FBI for a great example.)

3. The jury’s verdict today constitutes yet another bucket of cold ice thrown on the hot garbage heaps that are the “largely symbolic” state terrorism laws passed in the aftermath of 9/11. At least 36 states passed these statutes, but the NATO 3 case marked the first time Illinois prosecutors ever used theirs to go after anyone. Very few of these prosecutions have succeeded, nationwide. As of October 2012, of the nine people arrested under Tennessee’s state terror law, all but one "had their charges dismissed or were convicted on lesser charges."

4. The NATO 3 trial uncovered the disturbing degree to which Chicago police subject political dissidents to invasive monitoring, disruption, and counterintelligence programs. Everyone likes to think the bad days of COINTELPRO are over, but the courtroom testimony of undercover detectives assigned to infiltrate the left in advance of the NATO summit shows J. Edgar Hoover’s spirit lives on in law enforcement. See Kevin Gosztola’s reporting for details on the extent of the CPD's undercover operations.

5. Finally, while it’s extremely encouraging to see a jury of their peers reject this aggressive terror prosecution, I’m left wondering if the jury would have reached the same verdict had the young defendants possessed more melanin, or Muslim-sounding names. This country is thirteen years into its seemingly never ending terror wars, and while the public is increasingly reticent to accept mass surveillance in exchange for false promises of security, the Islamophobia and racism that lie at the heart of the post-9/11 civil liberties assaults are as strong as ever before. I’d like to think that, given the same facts but defendants with darker skin, the jury would have reached the same conclusion. But I am not so sure.