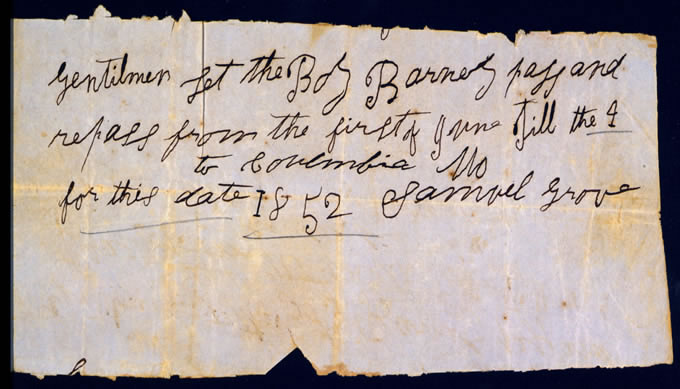 One of the first identification and surveillance systems developed in the United States was the slave pass. The history of how the pass system developed in relation to black resistance—pre-digital “hacking”—provides an important example of the relationship between surveillance and counter-surveillance. As black people devised systems to work around or even use the slave pass to their advantage, whites changed the technology and the systems governing its implementation. Just like today, when the FBI refuses to tell the public critical information about how it spies on us, knowledge of the pass system and the language that coded it gave people the power to avoid it or use it to one’s advantage.

But while the rudimentary technology of pass hacking was relatively achievable—even in the context of the extreme violence of the slave system—technological developments are widening the gap between the knowledge havers and the knowledge have-nots, making effective resistance more difficult.

For the peculiar institution to exist, plantation owners had to devise systems to keep track of and monitor the movements of the people they owned. One of the most powerful of these technologies was the slave pass, notes written by plantation owners enabling enslaved black people to travel off the plantation. In order for this system to work, black enslaved people (and initially also white indentured servants) had to be kept ignorant of the language that coded the slave pass system: written English.

While the connection is very rarely made in mainstream histories of US slavery, one of the primary reasons for laws banning black literacy was to protect the integrity of this nascent surveillance and identification system. After all, if black people could read and write, they had a much better chance of maneuvering around the system of control and monitoring—and therefore also of escaping slavery.

In his must-read book, “The Soft Cage: Surveillance in American from Slavery to the War on Terror,” Christian Parenti describes how the slave pass laws developed:

In Virginia the first pass laws, created in 1642, targeted poor whites, such as indentured Irish servants attempting to flee their obligations. Any white person leaving the colony required a pass from the colonial governor to ensure that they were not fugitives or debtors. By 1656 Native Americans entering the colony to trade had to carry passes, or “tickets,” issued by the colonial authorities. Earlier iterations of these regulations mentioned slaves, but it wasn’t until 1680 that an exclusive slave pass law was enacted in Virginia.

The pass system, Parenti writes, is “an artifact from a social world of face-to-face “community” relations, not one from a more complex, bureaucratized society structured through an elaborate division of labor and anonymous, more standardized forms of “association” between people.” The slave pass system had obvious shortcomings: the passes at first did not describe the physical characteristics of the person they were meant to provide passage for. The passes were thus relatively easily hackable—as long as the hacker had the requisite courage for the task of lying to people who had the power to torture or kill them, if the lie was discovered. Famous former slaves like Frederick Douglass described how they forged passes not only to enable their own freedom, but to liberate others.

In response to the hacking of the slave pass system, land owning whites created specific punishments to be doled out to people accused of possessing unspecific or fake passes.

But literacy wasn’t the only site of resistance to the pass system. While poor whites and enslaved blacks could write their own passes or alter passes to expand the date or geographic allotment, they could also pretend to be someone they were not.

Since the basic form of identification within the pass system was the name, naming too became a site of resistance. Mothers gave their children distinct names so as to keep track of them, via the grapevine, if they were sold off later in life. And truant slaves visiting distant plantations could try to evade patrollers by simply pretending to be a local of the plantation they were visiting. This loophole became an issue among patrollers after the Stono Rebellion of 1739. In a pattern that was quite common in the Carribbean (from which more than a few masters and slaves had emigrated) about a hundred slaves outside Charleston, South Carolina rose up and sacked plantations, stole weapons, and killed roughly twenty whites.

The response from white power was swift.

The uprising was soon crushed and terrified whites in the legislature proposed that planters provide lists naming all male slaves, thus “every Slave might be called by Name, when the patrols should visit plantations.” Here we see slave resistance provoking planted innovation at the level of surveillance and identification.

The successful deployment of literacy in the service of collective and individual liberation from the system of slavery ultimately led to the development of a more “tamper-proof technology, a system of metal slave “tags” or “slave hire badges.” These badges, “some of the first numbered ID’s in America,” were required for all enslaved men and women who hired themselves out—in the service of their “masters”—as cheap labor in cities. The system was adopted by Charleston, South Carolina authorities in 1783 as a mechanism of both recording “payment of the annual slave tax” and ensuring “political control of black people as a class.”

But enslaved people didn’t just forge passes. After all, as Parenti observes, between 1619 and 1777 there was no free place for black people to escape to; slavery reigned throughout the entire territory of what is today the United States. People hoping to escape slavery's chains therefore also learned how to forge and manipulate free papers. Like with the pass system, however, white power caught on to these efforts on behalf of black people to hack their way to freedom. The technologies of control and surveillance that developed in response catalyzed the development of the science of biometrics today.

Slavery and the development of biometrics

If free papers simply said “John James, 29 years old, purchased his freedom on 6/6/33,” any male person who could conceivably pass for approximately 30 years old might be able to use the papers to convince semi- or even fully literate whites that he was a free man. Black people therefore forged free papers, as they forged passes. And like with the hacking of passes, whites caught on.

In “crucial political and ideological maneuvers that redistribute power from slaves to slave owners and the state,” governments and slave owners began using printing presses to create standardized forms for free papers. These forms contained place holders for the entry of specific biometric-like characteristics, such as skin color, particular markings such as scars or deformities, eye color, hair texture, height, weight, body shape, and more. Absent a printing press, reproduction of these forms was next to impossible. Furthermore, the biometric characteristics printed on the forms made the reuse or reappropriation of the papers much more difficult.

The slave system further advanced the science of biometrics through the use of the “wanted poster as ID.” Wanted posters described escaped slaves in significant detail. Here’s one Parenti cites:

The demise of the institution of slavery did not stop the advancement of biometric identification technologies largely premised on systems motivated by white supremacy. Fingerprinting is currently the most widely used biometric technology in the world. It, too, has its roots in racism:

Among dactyloscopy’s [the science of fingerprinting] chief advantages—or so believed white colonial administrators, police, and bureaucrats—was its ability to compensate for the homogenizing effects of racist perceptions. Edward Henry’s innovations, for example  were explicitly driven by this idea. Like many white men, Henry doubted the utility of photography…when applied to black and brown bodies. How was a white warden or cop to recognize one dark face from the next? Dactyloscopy seemed to offer a way out. As one identification expert noted in 1902, fingerprinting would help “in the official identification of Chinese, Negroes, and other races the features of which at least to the Caucasian eye, offer hardly sufficient individuality to be at all times trustworthy.”

The biometric systems of identity, surveillance, and control active at the FBI’s “Next Generation Identification” center are a far cry from physical descriptions of black people on slave passes and free papers, and the relatively old science of fingerprinting. But the primary function of biometric identification systems remains the same: control. And because people do not like being controlled, in response to the FBI's aggressive deployment of biometric technologies, resisters are beginning to experiment with methods of avoiding or tricking the latest in face recognition systems.

But as technology advances and institutions like the FBI centralize more power, meanwhile keeping secret much of their activity from the public, the threat of oppressive domination looms larger than ever. While "slave resistance provok[ed] planter innovation at the level of surveillance and identification," the balance of power continues to shift in the government's favor as complex, expensive technologies increasingly dominate the field of surveillance and control. If Charleston, South Carolina's metal ID system made it much more difficult for slaves to forge free passes, the FBI's use of secret databases and nearly ubiquitous surveillance cameras and drones make our resistance to the systems of government control appear next to impossible.

Official slavery is abolished today in the United States, but we do not live in a fundamentally just society. Racist state oppression continues, and the surveillance and identification systems most active today are still closely linked to white supremacist systems of domination and control. The most obvious example of this is the so-called "criminal justice" system, which arrests and incarcerates black and brown people at rates far exceeding their percentage of the population.

The rapid acceleration of technological development, without concurrent protections for individual and collective privacy from government omnipotence, exacerbate the problem. If slave owners and state governments in the 18th century had the kind of biometric and surveillance technology the FBI has today, it becomes very difficult to imagine that Frederick Douglass’ name would connote liberation, genius, and bravery. Had the systems of control been more effective back then, by employing the kinds of digital technologies in widespread use by police, private security, and federal spy agencies today, Douglass would likely have been killed or imprisoned long before he made history.

When we look at the history of slavery and surveillance in the United States, it's easy to see that knowledge is power. That hasn't changed in the 21st century, but in many ways, thanks to technological developments, the balance of power between the government and the people has. The institutional racism motivating much of the surveillance, meanwhile, hasn't gone anywhere.