The FBI recently released documents to the investigative journalism organization MuckRock, revealing that our nation's most powerful domestic law enforcement organization believes it can use surveillance drones with virtually no legal limits. The only time the FBI thinks it needs to get a warrant to use a drone domestically is if it intends to penetrate the walls of a private home with thermal imaging or other technology. Otherwise, in the FBI's view, we're all fair game for warrantless drone spying.

Meanwhile, the Federal Aviation Administration (FAA) has informed the public that our skies will be filled with tens of thousands of drones within the next few decades. Federal law enforcement agencies like the FBI and DHS already fly drones in the United States, but soon enough your local law enforcement agency will, too. And we aren't ready.

Laws to regulate drone surveillance have passed in at least eight states, but they vary on the question of warrant requirements. Meanwhile, 42 states and the federal government have no statutes regulating drone spying. (Take action to pass a law in Massachusetts here.)

That's why the Drone Survival Guide is a timely piece of educational agit-prop to add to your arsenal. From the group's website:

Our ancestors could spot natural predators from far by their silhouettes. Are we equally aware of the predators in the present-day? Drones are remote-controlled planes that can be used for anything from surveillance and deadly force, to rescue operations and scientific research. Most drones are used today by military powers for remote-controlled surveillance and attack, and their numbers are growing. The Federal Aviation Administration (FAA) predicted in 2012 that within 20 years there could be as many as 30.000 drones flying over U.S. Soil alone. As robotic birds will become commonplace in the near future, we should be prepared to identify them. This survival guide is an attempt to familiarise ourselves and future generations, with a changing technological environment.

This document contains the silhouettes of the most common drone species used today and in the near future. Each indicating nationality and whether they are used for surveillance only or for deadly force. All drones are drawn in scale for size indication. From the smallest consumer drones measuring less than 1 meter, up to the Global Hawk measuring 39,9 meter in length.

The group also published a text accompaniment to the visual drone guide embedded above, which "contains tactics for hiding from drones and interfering with the drones’ sensors." You can order a guide, printed on shiny (drone-blocking) aluminum paper, for $15 on the organization's website. 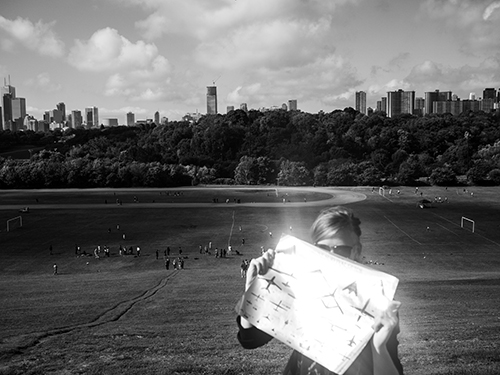 One of the techniques for misleading a drone's camera is putting reflective material on the rooftops of houses or cars (glass, mirror) to try to reflect sunlight into the drone's camera, making this poster a useful tool to interfere with the drone's sensors. On a more associative level the mirrored material reminds us that drone surveillance is ultimately people watching people. In a way we are looking at ourselves through sophisticated mirrors.

The Drone Survival Guide has been translated into Pashto, English, Dutch, and German. If you translate it into another language, the group will send you a copy of the guide for free.