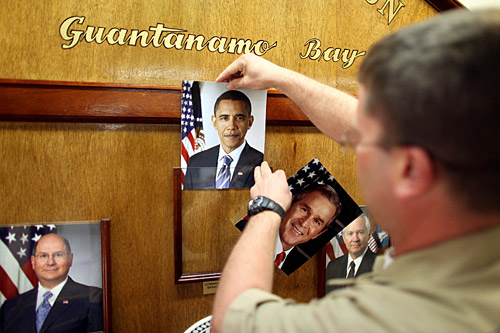 Twelve years have passed since the US government of President George Bush made the dramatic decision to ignore half a century of international law, abrogate the Geneva Conventions and bring us to a place today where 164 men who have never been tried and 84 of whom have been cleared for release, are still in Guantanamo Bay prison.

The horror of the place cannot truly be conveyed in words. Fifteen men are being daily force fed, in contravention of medical ethics. The current hunger strike has lasted since February and at one time involved two thirds of the prisoners. Men became skin and bones, according to their lawyers, one of who has an on-going court case to get an independent doctor into the prison to assess his failing client. Violence is a daily norm with invasive body searches and manhandling of prisoners in and out of cells by special teams of heavy soldiers in body armour. Solitary confinement for many has lasted months or years. A litany of physical injuries, psychological deterioration, and illnesses caused by the conditions of the last 12 years are fully documented and are an indictment of all those responsible at every level of US government and military.

Guantanamo is the symbol of the new normality imposed on our world since that reckless Bush-era phrase was coined – the war on terror. The notorious Abu Ghraib photographs of US abuse in Iraq in 2004 had their origins in the personnel and practices authorized by the Bush White House in Bagram, Kandahar and Guantanamo.

Key elements of US practice: prisoners held indefinitely and without charge or trial; the Geneva Conventions ignored; torture and abuse widespread; the judiciary politicized; are a step backwards for civilization as they encourage every other country similarly to normalize abuse of human beings. The results are visible daily in Palestine, Iraq, Egypt, Syria, for instance. And the killing of civilians by US drones in Yemen, Pakistan and Somalia is part of the pattern where civilians are treated as if they are combatants.

There is however a lawyer-led fight-back in the US against all this, which is significant and in marked contrast to the apathy or vindictiveness of politicians who have not studied the issue and accept the unacceptable status quo. Over these nearly 12 years hundreds of US lawyers, as well as many elsewhere too, have worked tirelessly to get due process for Guantanamo prisoners, first under the Bush administration and then under President Obama, but have been knocked back again and again by appeals from the government lawyers over cases won. Back in 2004 the US Supreme Court gave the prisoners the right to habeas corpus hearings in US courts. A handful prevailed in the district court and the government did not appeal, instead sending the men home. But no district court decision in favour of a prisoner survived review by the higher court.

Since Colonel John Bogdan took over command at Guantanamo last year his men have been deliberately confrontational with the prisoners: with invasive searches of the bodies of prisoners who were meeting lawyers or making a phone call; ransacking of cells and removal of personal items; searching of Korans. The colonel’s harsh new regime sparked the last hunger strike, which was the men’s response of despair at their treatment and the continuing legal limbo they found themselves in.

Weeks into the strike lawyers for the prisoners went into action in the US to publicize the outrageous – and illegal – conditions in which all this was happening. And within a few weeks last spring powerful media like the New York Times called for the closing of Guantanamo. Leading members of Congress called for those men cleared to be repatriated. Hundreds of unknown American citizens donned orange jumpsuits, went on hunger strikes, demonstrated outside the White House. And dozens of nurses were sent by the administration to Guantanamo to carry out force-feeding twice a day and make sure that no prisoner could die. It seemed that perhaps the world had really woken up to the horror of Guantanamo, and that the men’s sacrifice of their health had succeeded.

Almost all of them were seized (and some bought for bounties) without evidence of wrong-doing. Some prisoners at least know why they are still in limbo. The Yemenis, for instance, 55 of whom have been cleared, had a new obstacle put up by the president himself. President Obama simply declared, after the 2009 failed underwear bombing in a civilian aircraft, that because of its origins in Yemen no one would be returned to that country. During the height of the hunger strikes in May he lifted that ban, but still no Yemeni has been returned home.  The US is discussing building a possible new prison for them in Yemen itself.

Meanwhile the topic of torture has dominated the current pretrial hearings of the five Sept 11 defendants held now at Guantanamo after several years in secret CIA prisons known as “black sites” in a number of other countries. All were tortured severely over years. Khalid Sheikh Mohammed was waterboarded 183 times in March 2003 and gave several false and misleading statements during that time. Walid bin Attash was subjected to stress positions and forced nudity. Ramzi bin al-Shibh also was subjected to stress positions and forced nudity, as well as torture with electric shocks, sleep deprivation and forms of sexual violence.

At issue is the US government's obligations under the Convention Against Torture, an international treaty banning torture, to which the United States is a party.

Supporters of the CIA's interrogation program, such as former Vice President Dick Cheney, argue that torture was necessary to obtain information that could prevent another terrorist attack on American soil – an unproven assertion and one that is contrary to fundamental law. And the convention states, "No exceptional circumstances whatsoever, whether a state of war or a threat of war, internal political instability or any other public emergency, may be invoked as a justification of torture." Torture is recognized as a war crime and a crime against humanity by the International Criminal Court.

President Obama’s fateful decision to take no action on the illegal acts of the previous administration and to defend the system has perpetuated illegality. Millions of dollars have been wasted on a charade of a legal system for all the Guantanamo prisoners. Hundreds of America’s best lawyers have been tied up in a process where they were largely impotent. The US has lost respect around the world. The torture past and present cannot be undone. Those responsible will not face US trials.

The damage to international legal norms, and to those who have been abused and suffered so gravely, could however be at least partially repaired by speedy releases from Guantanamo of all those cleared, apologies, payments of damages. The remaining 80 must be either charged and tried, or released. Those trials cannot be the illegal show trials now planned, but real trials in established courts where the prisoners can testify about their torture.

Victoria Brittain is a journalist who has written extensively on Guantanamo-related subjects for a decade. Her most recent book is Shadow Lives, the forgotten women of the war on terror.