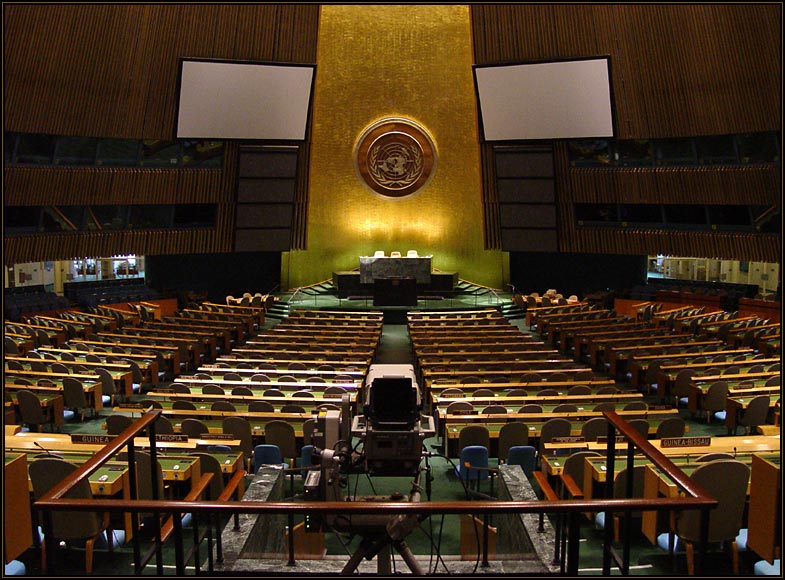 After hearing testimony from the United States government and US civil rights activists, the United Nations Committee Against Torture has released its concluding observations. In its final report, the UN Committee raises concerns about domestic US government policies touching on issues ranging from police militarization to excessive force and racial profiling. The ACLU released its own shadow report on US obligations under the Convention Against Torture and other Cruel, Inhuman or Degrading Treatment or Punishment, addressing "key areas in which the US government has failed to uphold its human rights commitments under the Convention."

Highlighting concerns brought to New York by youth activists from Chicago, the UN Committee Against Torture had this to say about US police:

26. The Committee is concerned about numerous reports of police brutality and excessive use of force by law enforcement officials, in particular against persons belonging to certain racial and ethnic groups, immigrants and LGBTI individuals, racial profiling by police and immigration offices and growing militarization of policing activities. The Committee is particularly concerned at the reported current police violence in Chicago, especially against African-American and Latino young people who are allegedly being consistently  profiled, harassed and subjected to excessive force by Chicago  Police Department (CPD) officers. It also expresses its deep concern at the frequent and recurrent police shootings or fatal pursuits of unarmed black individuals.

Just after the Ferguson non-indictment announcement, the UN's observations strike a chord:

In this regard, the Committee notes the alleged difficulties to hold police officers and their employers accountable for abuses. While noting the information provided by the delegation that over the past five years 20 investigations were opened into allegations of systematic police department violations, and over 330 police officers were criminally prosecuted, the Committee regrets the lack of statistical data available on allegations of police brutality and the lack of information on the result of the investigations undertaken in respect of those allegations. With regard to the acts of torture committed by CPD Commander Jon Burge and others under his command between 1972 and 1991, the Committee notes the information provided by the State party that a federal rights investigation did not develop sufficient evidence to prove beyond a reasonable doubt that prosecutable constitutional violations occurred. However, it remains concerned that, despite the fact that Jon Burge was convicted for perjury and obstruction of justice, no Chicago police officer has been convicted for these acts of torture for reasons including the statute of limitations expiring. While noting that several victims were ultimately exonerated of the underlying crimes, the vast majority of those tortured –most of them African Americans–, have received no compensation for the extensive injuries suffered (arts. 11, 12, 13, 14 and 16).

The State party should:
(a)     Ensure that all instances of police brutality and excessive use of force by law enforcement officers are investigated promptly, effectively and impartially by an independent mechanism with no institutional or hierarchical connection between the investigators and the alleged perpetrators;
(b)     Prosecute persons suspected of torture or ill-treatment and, if found guilty, ensure that they are punished in accordance with the gravity of their acts;
(c)      Provide effective remedies and rehabilitation to the victims;
(d)     Provide redress for CPD torture survivors by supporting the passage of the Ordinance entitled Reparations for the Chicago Police Torture Survivors.

Referencing the high-profile police killing of unarmed teenager Israel Hernández in Miami Beach, Florida, the UN Committee recommends changes to US police policy with respect to the use of Tasers.

27. The Committee is concerned about numerous, consistent reports that police have used electrical discharge weapons against unarmed individuals who resist arrest or fail to comply immediately with commands, suspects fleeing minor crime scenes or even minors. Moreover, the Committee is appalled at the number of reported deaths after the use of electrical discharge weapons, including the recent cases of Israel “Reefa” Hernández Llach in Miami Beach, Florida, and Dominique Franklin Jr. in Sauk Village, Illinois. While taking note of the information provided by the State party on the relevant guidelines and available training for law-enforcement officers, the Committee observes the need to introduce more stringent regulations governing their use (arts. 11, 12, 13, 14 and 16).

The State party should ensure that electrical discharge weapons are used exclusively in extreme and limited situations –where there is a real and immediate threat to life or risk of serious injury– as a substitute for lethal weapons and by trained law enforcement personnel only.

The State party should revise the regulations governing the use of such weapons with a view to establishing a high threshold for their use and expressly prohibiting their use on children and pregnant women. The Committee is of the view that the use of electrical discharge weapons should be subject to the principles of necessity and proportionality and should be inadmissible in the equipment of custodial staff in prisons or any other place of deprivation of liberty. The Committee urges the State party to provide more stringent instructions to law enforcement personnel entitled to use electric discharge weapons, and to strictly monitor and supervise their use through mandatory reporting and review of each use.